#9805  by Alfred
19 Jan 2021, 06:53
The last pair of floors I made were maisemore clones simply because Id then have the removable parts interchangeable .
I'm doing some more soon but I'm pondering whether to dispense with the entrance blocks altogether
Last year the only time I ever touched one was to pick it up out of the grass when moving the floor.
I run reduced entrances permanently and mesh based provide ventilation.

What's the downside to just having a hole at the front?


What's the downside to just having a hole at the front?


Traffic jams in a big flow.
When you see bees queuing to get in and out of your hive you know they are not working optimally.
I run productio9n hives with entrances fully open (length of hive) during late spring and summer. Reduce in the autumn and winter.

#9807  by AdamD
19 Jan 2021, 10:21
As usual in beekeeping - a different view!
I tend to run hives with blocks in, or the floor only has a 15 - 20 cm opening in any case. The picture below of the large hive had a reduced entrance and seemed to suffer no issues as a result. You can see a third brood box (I put it on as I was going away as there were 20 frames of brood in there and I wanted to ensure enough space). You can also see a clearer under the top two supers and some had already come off. In the background you can see another National hive with a reduced entrance. Yes, the entrances were busy but didn't seem to be overly congested. This photo was taken in July 2018 - a good year for honey.

This is the problem

It may depend on your situation. For much of the year it’s probably academic. With big colonies at their peak during a big flow there might be congestion around the entrance. How much that actually affects the final crop taken off I don’t actually know.

For me with bees in out apiaries with high wasp populations, the offset of that is the risk of wasps or robbing bees getting a hold before you notice and constantly placing the bees under stress trying to defend their stores. Actually it’s my stress as well, as seeing a hive under attack is not nice to see or deal with once underway. It’s all probably a matter of degree. Small entrances also reduce the risk of mice in winter without mouse guards.

Another downside I have with built in too small entrances is the practical work around to allow you use an tray oxalic vapouriser that doesn’t come with a spout.

Removeable blocks maybe give you the best of both worlds?

Perhaps I should have worded differently
My query is not so much the size of the hole as this could be adjusted with a shutter,but is there another importance of a removable block( honey is way down the list for me now)that I'm missing

I have certainly built nucs with a simple fixed hole entrance without issue and most of my self built floors simply have a small slot missing out of their top edge which serves as the entrance.

I have to admit to rarely seeing much congestion around the entrance but maybe that is because my bees don’t go to crops/ other folks colonies are larger/ I work during the day so only tend to see them in the week after most foraging flying is slowing down maybe?

So what are the trays there for otherwise?
Could the design be simplified weatherproofed some more?
( obviously with good underfloor venting and provision to renew the mesh ) 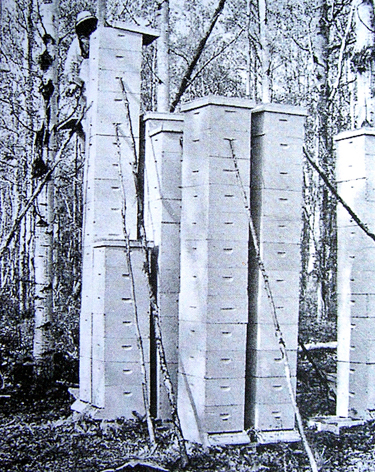 
Try counting weekly drops?
Mine are slid in over winter to give almost solid floors. I leave a small gap just before the entrance so any rainfall drifting in through the entrance falls straight into the ground and not the tray.