#10886  by NigelP
14 May 2021, 17:19
Excellent, thta sounds spot on. I usually unite after about 10 days but longer won't matter.
Note this is a variation of Snelgrove method 2. In the original method you remove the queen from top box after 4 days and place in bottom box....then you are back to destroying queen cells in top box.
Just watch for the occasional queen cell appearing in bottom box on frame of sealed brood, there is often an egg or two that you miss....well I do.

#10897  by Patrick
15 May 2021, 16:56
Also a vote for Snelgrove II. The only thing I would add is that it often makes casual reference to a "Snelgrove board" as being part of the equipment required and often people feel obliged to buy one, multiple edge entrances on both sides included (which for Snelgrove one might be crucial but for Snelgrove II it isn't..). I am sure Lesley Snelgrove still used a multiple door type for both simply because he had made a load!

For Snelgrove II all you need is a normal crownboard converted to a split board by blocking off the feed holes and a small section cut out of the edge rim on one side. You can make two diagonal cuts a couple of inches apart down to the plywood and then simply a small nail in the middle to make a rotating door. When out of use as a split board simply close the door and use as normal. Its so easy I just do it to all my crown boards anyway so I am never looking for the "one" converted to use as a split board.

As a present member of L. E. Snelgrove's association I blush to admit I never even tried the Snelgrove I method as it screamed faff and I couldn't be bothered with all the opening and closing doors - like a stage bedroom farce (Oh Vicar, you've no trousers!) with multiple hives all trying to leg it in the same fortnight in May. Don't tell anyone..

#10898  by NigelP
15 May 2021, 17:25
There is another board called a Horsley Board....obviously made by a typical Tyke that only has one entrance.
Intriguingly the one show below also has small piece of queen excluder include meaning the bees can move between boxes. More study required.... 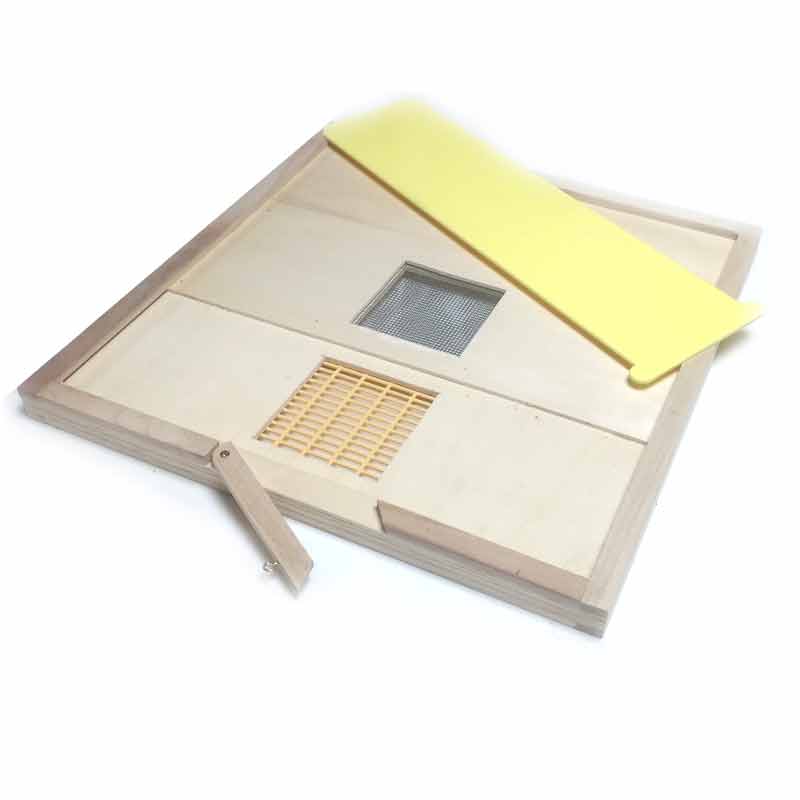 I've always suspected Snelgroves method 1 was based on him keeping local annual swarming bees and the method 2 was in desperation when he found queen cells. Many of my queens don't swarm in their first full year (there are exceptions) so swarm prevention aka Demaree (which is a lot of work) is never done.

I need to keep things simple with the bees pulling down queen cells for me, needing only a spare brood box, snelgrove and/or crown board adapted and the ease to rejoin in a couple of weeks especially with limited space in my garden!

Some of the methods just sound too involved and time consuming, not to mention relying on reasonable weather which we still don't have here!!:(

#10902  by Alfred
16 May 2021, 18:07
That QX facility is interesting
I cant find queen so I could empty one box into another then put cleared frames of bias back in set the holes to qx, and have the workers only repopulate them ,so I would know which box the quen is in.
Then set the holes to vent- only using the shutter,and resume snelgrove procedure
The same could be done with a couple of entrance disks fitted to an existing snelgrove

#10973  by NigelP
22 May 2021, 09:09
Bobby just note that the method I describe with leaving the queen in the top box is a variation I developed and is not the original Snelgrove method 2, where the queen is returned to the bottom box after 3-4 days.
Well worth getting (and reading) a copy of Snelgrove's book. Whilst his reasoning behind why bees swarmed was wrong (he could only deal with the information that was available at the time he lived). But he nailed the process and steps to take pretty well. Whilst he describes actions to take on dogmatic days 3, 4 etc no need to take those timings that seriously as it's all pretty flexible....and was actually designed for out apiaries where you didn't have to visit too often.

#10980  by Bobbysbees
22 May 2021, 13:39
Thanks NigelP
I will try and pick up a copy next time Im down in Alnwick and spend half a day in Barter Books (probably spending more than I can afford as usual.)
I'v seen the multi door boards used in a few video's on line but it just seemed so over complicated. The converted crown board idea makes so much more sense using the technique you described.
Plus a most of the time I have seen it used is in order to act as a method of vertical splitting and bleeding off some of the flying bees to balance numbers between the two boxes

#11123  by Bobbysbees
10 Jun 2021, 14:36
Well having one of my colonies going hell for leather trying to throw up swarm cells I am in a sense giving up and going to give this method a try I have already taken one split off them and am trying to keep them in just a double brood but the way they are reproducing and the rate of nectar coming in and clogging up the brood nest, despite under supering with a second super (all be it with foundation as I don't have drawn comb to give them). I have to do something or I'm pretty sure I am going to have to deal with a swarm and as I'm in a a small town I don't fancy it, only being in my second year.
Please tell me this is not typical of a 1 year old buckfast queen. lol
I'm guessing the weather has had an impact on things this year but how much.. as a beginner I'm not certain,