What have you done today bee-related?

#7402  by Steve 1972
26 May 2020, 12:56
I set of yesterday with a plan to pull a load of supers of for extraction..i took 12 empty supers with me with drawn foundation to replace any i removed...well as we know nothing ever goes as planned where bees are concerned..only two supers out of 25 could be removed all the others failed the shake test and the refractometer was reading 21% on most of the frames and none where fully capped so i left them all on..first extraction last year was the 10 June so i may be a tad premature but saying that everything is more advanced this year..
Any way forgetting about extraction i ended up having to do two artificial swarms on two 2019 buckfast colonies...the Queens are now in nucs with a sealed Queen cell left in each colony..i needeed to do a third AS on a 2018 buckfast colony but i think i missed the boat on that one..several sealed Queen calls where found with no eggs present and no marked clipped Queen to be found anywhere so i knocked all but one Queen cell down and closed them up..

The strange day never ended there..

..The virgin Queen i released from a Queen cell 9 days ago decided to go on a mating flight or orientation flight..on returning she must have undershot the landing board and ended up under the open mesh floor..a big ball of bees where gathering around her with many more fanning there nasonov glands towards the quickly growing cluster..
I had to remove the brood box and replace the floor with another floor and plonk the brood box on the new floor..i then turned the floor with the Queen on it upside down and propped it up at the entrance..instantly the bees started marching in.. i did not see the Queen go in but by the nasonov glands aiming at the hive entrance said to me that the Queen was now where she should be..

.
Here is a picture of the bees marching in on a upside down mesh floor.. 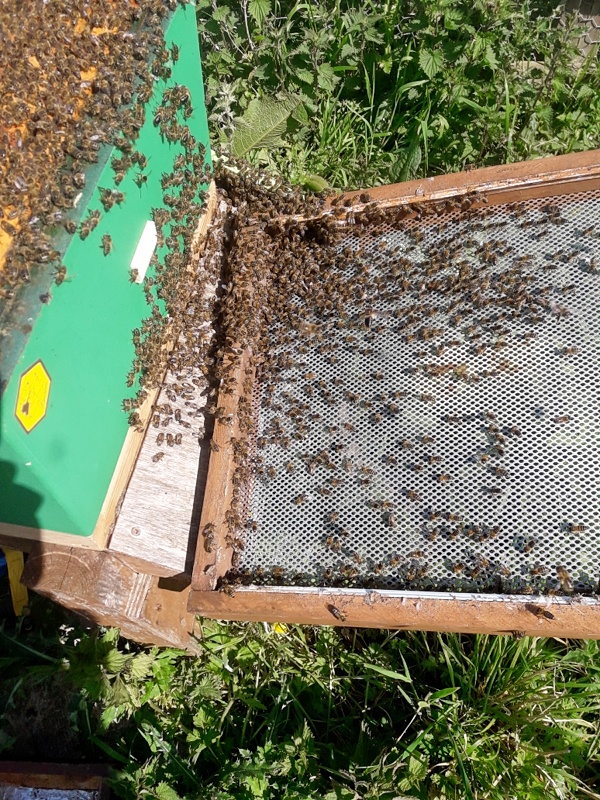 #7404  by AdamD
26 May 2020, 13:31
I had a strange one a week or so ago. One evening I was at my out apiary and saw a few bees on the leg of a hive stand. There was the clipped queen among the bees. I assumed that she had attempted to swarm that day and hadn't gone back. I popper her in a cage with a few attendants and put them in a nuc which I knew to be queenless, so she could be looked after. The following day I went through the colony and there were NO queencells at all so I opened the cage and she walked back in. A few days later (Sunday) there were eggs in the hive and still no queencells so she was accepted back without problem. Maybe the lockdown meant that she needed to get out for a wee walk!
May your bees read the same books as you do.

#7484  by NigelP
29 May 2020, 16:46
Last inspected this apiary on 25th of May not a queen cell in sight bar one hive with a clipped queen where there was one started cell.....that I knocked down. Although I do have 2 elusive queens which are marked but not clipped and all was well with these when examined, lots of eggs BIAS etc etc....
Arrived today cos I wanted to put clearer boards on and was greeted by this big swarm about 40 foot up a tree. Can only assume it is one of mine but from which hive did it come from?
Maybe I'm going blind and missing queen cells, but 4 days from last inspection.......ruddy bees.....
Nowt I could really do without a "cherry picker"...so will take empty hive when I return tomorrow and see if they are still waiting for a new home.
Guess I'll find out which hive it came from at next full inspection. 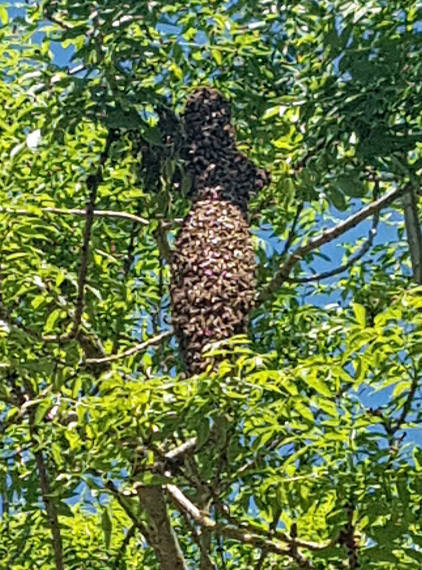 I filled a feeder with wax cappings from the last honey extraction. I'm replacing the (now empty) thymol syrup feeder I gave the swarm. Here's a question - will the bees dig through the wax to get all of the honey, or just what is easily obtainable?

#7498  by NigelP
30 May 2020, 16:53
Nope Jaz, they were gone at 6AM when I went to collect supers from 3 apiaries.
Just spent hours and hours of monotonous honey extraction....hours of my life I will never get back.
Mind 16 buckets of liquid gold sat in garage waiting to be weighed.
Time to sit in the sun with a very cold beer.

#7499  by Patrick
30 May 2020, 17:27
They will dig around Jazz, but you will probably need to turn it over with a hive tool after a few days as the sticky stuff will be at the bottom. A third churn may be necessary of there is still a lot of spludge in the bottom. Don't worry about burying bees whilst you do it, they will clamber out ok. After a week or so you should find they have cleaned up most of it. If you leave them in there for several weeks they then use the wax to fashion some amazing shapes in wax - seems they just cant resist! So don't leave it too much longer than the dry flake stage.

Yep I've had that too; it's not always easy to tell.

I had a swarm issue from a hive a couple of weeks ago. Started to settle about 2 metres up in three clumps - at lease, I thought, it was my side of the fence. Went through the two probable colonies - with assumed virgins in. One had no queencells at all. The other had sneakily made some late emergency queencells which I cut down leaving the marked queencell - so I just got away with that one as the virgin was not quite out. Back to the first hive and all the bees came back. The queen was laying a week later. So it must have been a mating swarm. Not very common in my experience.
May your bees read the same books as you do.

#7505  by NigelP
31 May 2020, 08:38
I've seen several in the back garden apiaries. It's more a matter of timing in you being there when it happens. It doesn't seem to last long though, about 20-30 minutes tops before they are all back.
I was reading somewhere that queen is frequently accompanied with an entourage of bees into the DCA's and then guided back to the hive by them after her nuptials. The rational being given was that alone she is a meal for anything that sees her, but in a crowd she is less likely to be the victim. Also supposed to act as guides to get queen back to hive.
Last edited by NigelP on 31 May 2020, 09:22, edited 1 time in total.