#10051  by MickBBKA
20 Feb 2021, 18:38
I read on here a week or 2 ago about folk just lifting boxes and having a look at the bottom of frames for queen cells rather than doing proper inspections. I personally think that is really bad advice and lazy beekeeping. Bees don't listen to this stuff and do what they want, when they want to. This is a picture I took on an inspection a couple of years ago. I had fully inspected a double brood colony and not found any queen cells. As I put the supers back on I always pull the centre 4 frames just to check as bees move eggs around the colony and above the queen excluder and I found this. I usually find this at least once a season. Don't get caught out, this queen could emerge and the bees remove the cell the next day and you would never know what just happened. 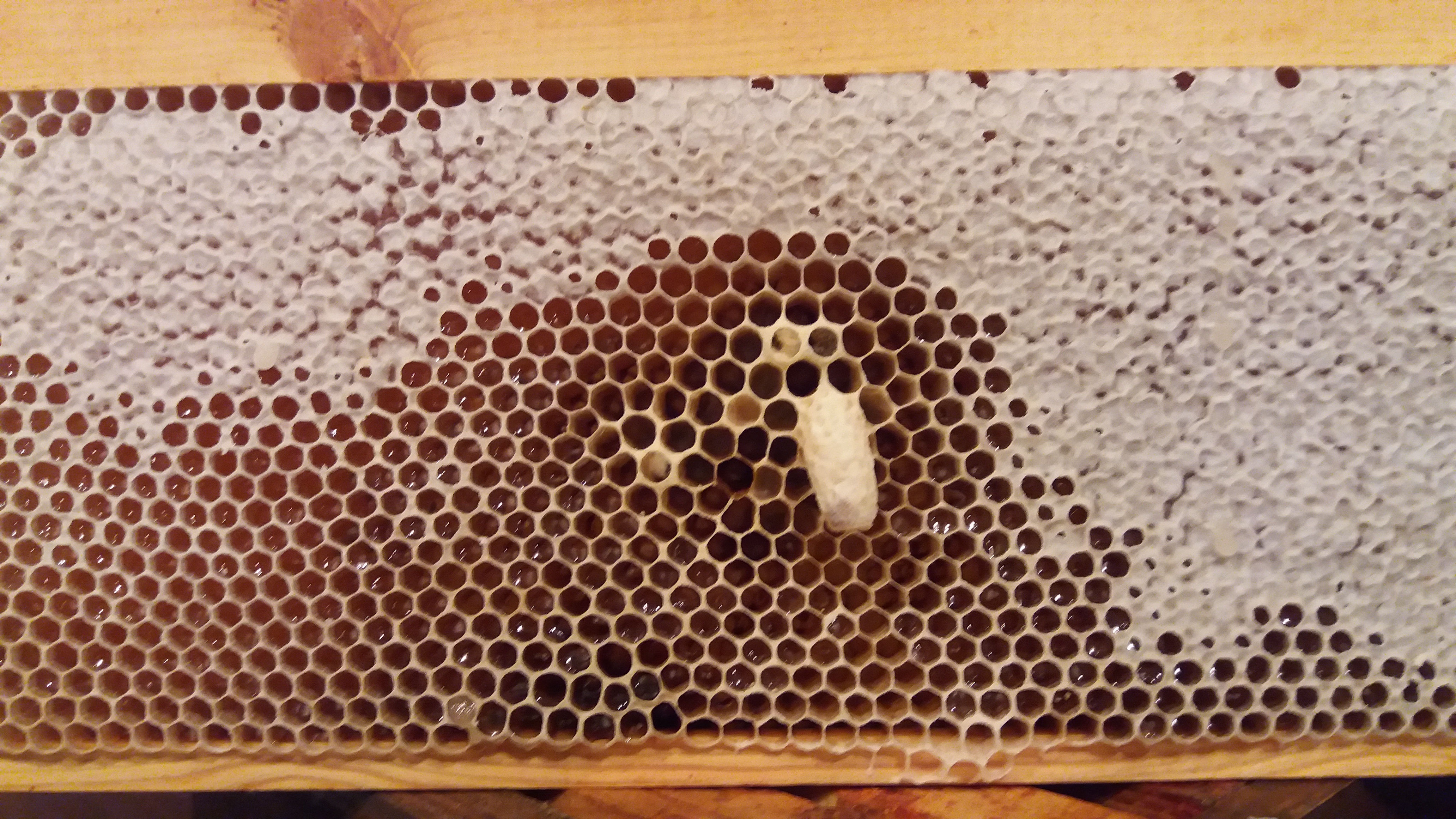 Alfred wrote:Slinky little queen and/or dodgy QX could have you one in the honey super and no-one tells you to look there for them.

Nope. Happens too often. Why would a queen go up there, lay half a dozen eggs and come back down. Also one of the methods I use to requeen is to remove a queen, wait a week and then place a frame of eggs in the colony to raise new queen cells. The bees often take eggs and place them in another comb and raise queen cells in that one. Bees move eggs..........

#10059  by NigelP
21 Feb 2021, 10:06
Its not usually bees moving eggs around it's more likely worker bees laying eggs that are far enough from the brood nest that they escape the "police" bees that are looking out for them. Every hive has a small percentage of laying worker bees and when you get these eggs in super frames they turn into drone cells.
You are probably looking at a king cell.

#10060  by AdamD
21 Feb 2021, 11:35
"I read on here a week or 2 ago about folk just lifting boxes and having a look at the bottom of frames for queen cells rather than doing proper inspections".
Yes I do do that on occasions. And I agree that it's not 100% reliable. Would I tell a beginner to do it? No. However sometimes time does not permit a full inspection so it has to do sometimes and I have to risk it. I guess it could be called 'Russian Roulette Beekeeping'.

I am sure that bees move eggs around and have seen queencells in supers on occasions. I have also seen drone brood in a super when there's a laying queen down below. Bees don't read books!
May your bees read the same books as you do.

I am sure that bees move eggs around and have seen queencells in supers on occasions. I have also seen drone brood in a super when there's a laying queen down below. Bees don't read books!

Science has yet to document bees moving eggs around......as I say the more likely explanation for eggs in a super is down to laying worker eggs that escape the "worker police" by being distanced from their patrol patches.... and as you correctly noted produce drones.
Those "queen" cells will never emerge as they are kings cells.

..
That Queen cell does not look right to me..it looks more like what you have said and that being a King Cell..i have had my fair share of laying worker colonies and that sealed cell is very similar to all the king cells i have seen and more so from the picture it appears to be in drone size cell's ?..i know legit Queen cells can appear in among drone brood on brood frames but that is a super above an excluder..i have had Queens get through the excluder on a couple of occasions resulting in the obvious ..super frames full of capped worker brood and drone brood..but never king cells alone..
I have however seen many last ditch attempts from drone laying Queenless colonies making random king cells up into the supers..
From my take the bee Police have been to busy elsewhere..

#10068  by MickBBKA
22 Feb 2021, 02:09
Well, first, it wasn't a king cell ( please give me a bit of credit ) and I made a successful split with it, although she was a bit of a scrub queen. Also its not sealed in that picture and the colony wasn't a drone layer. I am not daft.......... Second, I am not sure about the science, but I display observation hives several times a year at various events. I have seen bees carrying eggs on several occasions. They may have gone on to eat them, I don't know, but they were moving them some place. The science still won't explain my requeening colonies moving eggs to another frame will it ? Just say'n..

Science would say your queen moved upstairs briefly if they were worker eggs. Strange goings on on Teesside

Now a picture of a bee carrying an egg would be an amazing.